According to an article over on Slash Gear, Vodafone has told them that customers that pre-orders the Bold 9900 should start receiving the RIM smartphone as of today. And for those that may be sitting on the fence when it comes to the BlackBerry Bold 9900, we have a sneak peak video for your viewing pleasure below.

The sneak peek BlackBerry Bold 9900 video is an official Vodafone video lasting almost three minutes and shows off the latest smartphone from the Research In Motion camp to come and play on the Vodafone network.

Again for those that might be sitting on that BlackBerry fence, here’s what the BlackBerry Bold 9900 offers the customer…a 2.8-inch touch screen, QWERTY keyboard, 5 megapixel auto-focus camera with LED flash and 720p video, 1.2GHz processor, BlackBerry OS 7, 768MB RAM, 8GB internal storage, microSD expansion up to 32GB and is apparently the thinnest BlackBerry ever at 10.5mm.

Price wise the BlackBerry Bold 9900 from Vodafone can be gained as a free smartphone when handing over Â£41 per month for which you will receive 1200 minutes, unlimited texts and 500MB data based on the usual two-year contract.

If you require more minutes you can still get the BlackBerry Bold 9900 as free device but for Â£57 per month on a two-year term and get 3000 minutes, unlimited texts and 500MB data.

If you don’t mind shelling out a few quid upfront for the smartphone you can opt for paying Â£36 a month and get 900 minutes, unlimited texts and 500MB data on a two year contract, however the handset will cost you 99 quid upfront.

As with all these deals the lower the monthly outlay the higher the upfront cost, so in order to get the lowest monthly cost at Â£20.50 you’d need to purchase the Bold 9900 for Â£399 and you would receive a paltry 100 minutes, 500 texts and 250MB data.

So there you go, the options for picking up the BlackBerry Bold 9900 from Vodafone in the UK, are any of our readers going to hit their local Vodafone shop to grab this handset? Oh and don’t forget to check out the video below…enjoy. 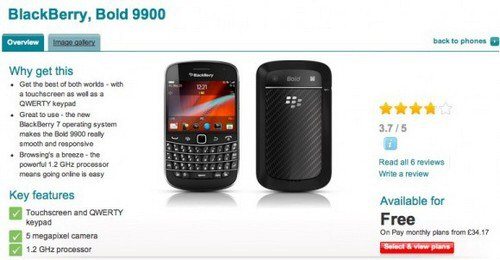