I’m pretty sure most have heard by now of a smartphone coming out of the HTC camp that has the codename HTC Ruby, we’ve reported on the Android handset a couple of times recently, well the latest bit of news on the device is the Ruby is getting a name change along with some info on a release date.

According to an article over on Pocket Now, they have heard from one of their “reliable sources” gain of the unnamed variety, which says that the HTC Ruby will actually come out to play on the Android playground as the HTC Amaze 4G.

Apparently Amaze 4G is one of numerous handles HTC had files trademark applications for recently, along with the HTC EVO Design 4G, a device that is speculated to be the HTC Kingdom for the Sprint network, and HTC has also files for the “Amaze” tag in Europe as well.

As for the potential release date of the HTC Ruby — HTC Amaze 4G, the guys over at Tmonews have got hold of a doc that shows that the Ruby/Amaze 4G has been scheduled for release as of the 26th of October along with such smartphones as the Samsung Hercules, which is of course the Samsung Galaxy S II for T-Mobile, although they do stipulate that date could possible change.

As for specs on the HTC Ruby / Amaze 4G, the device offers as far as we are aware, a 4.3-inch qHD touch screen, 8 megapixel camera, 1.5 GHz processor and dedicated still and video capture buttons.

Obviously at this time there is no word on what price the HTC Ruby / Amaze 4G will actually hit potential customers pockets for, and whether the smartphone will actually live up to its new name and amaze people remains to be seen, more as and when we here. 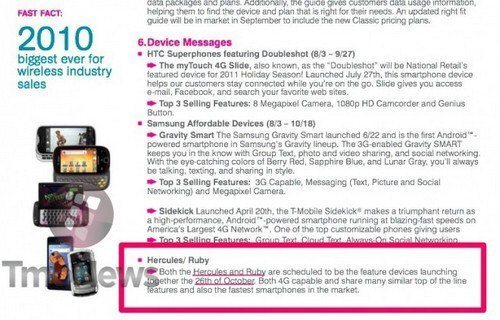