Word of the Madden NFL 12 app for Android becoming available comes our way courtesy of the guys over at Phandroid, and with the Madden NFL 12 Android app the user can choose from the 32 NFL teams and play matches in true-to-life stadiums, track statistics, launch winning strategies from in-depth playbooks, and make trades.

The Madden NFL 12 app enables the user to draw up hot routes for defence, running and passing, along with the ability to save your best as audibles. You get the ability to slow down the clock and make the play on both sides of the ball with Action Control Time and Total defensive Control.

User can also pause the action, and using Total Defensive Control place your players in a position to deliver game changing hits, while Action Control Time enables the user to dominate defences with sprints, spins, dives and jukes.

Madden NFL 12 for Android also offers multiple modes where the user can relive the 2010/2011 playoffs, or use Season Mode to play through the entire 16 game NFL season, or simply jump right into Exhibition Mode.

For those that wish to get their football action on via the Madden NFL 12 app for Android the application will hit your pocket for roughly $7 and is available to download to your handset running Android 2.1 and above from the Android Market. 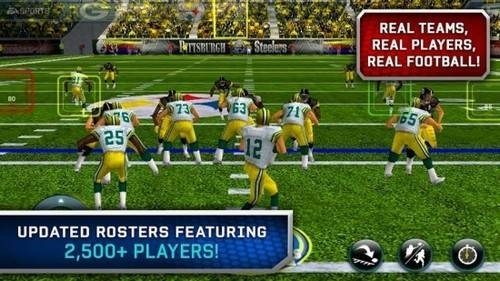