iOS 5 is going to be announced at WWDC 2011 somewhere around October 4th, and this date looks more promising everyday. The latest news surrounds Facebook integration into iOS 5.

Yesterday we reported that Twitter will be integrated into iOS 5, with Twitter holding an event starting October 10th, now we know that Twitter will not announce anything to do with iOS 5 before Apple do, so it stands to reason that the big Apple event will kick off before October 10.

The large social network Facebook will be getting its teeth into iOS 5 as well as Twitter, and a few screenshots below courtesy of MacRumours is not prove it is real, only official announcements will prove real or not.

The screenshots are nothing special but it is a start on the right iOS 5 path, they show the Facebook logo at the top as well as the ability to contact synching and adding accounts.

If you take a look at the next screenshot on the right, it shows what looks like to be a status update screen that can be launched via the camera roll within iOS 5. This means that users will be able to share status messages and locations on Facebook walls with groups and friends. Nothing exciting here then!

Facebook is one of the most downloaded iOS apps, but the app has nothing exciting and is not as smooth and perfect of what it could be. You cannot do simple steps like upload photos or videos for example, in some cases you need other apps to make this painless, this is why Facebook integration within iOS 5 is needed.

There is no official Facebook app for the iPad as of yet, so to see one would be great news. We suspect that Apple will reveal news about iOS 5, Facebook and Twitter integration within iOS 5, and of course the iPhone 5 or possibly the iPhone 4S.

The Apple WWDC 2011 event and announcements will probably happen at Apple’s Cupertino headquarters October 4 (Fingers crossed as they say). If this date is correct then we only need wait 7 more days.

If the event does kick off October 4, we suspect the Apple iPhone 5 will have an October 14 / 15th release date. We would love to know if you would use Facebook or Twitter integration within iOS 5, if so what one would you use the most?

Please join me Mark Chubb on Facebook, Twitter or Google+ for instant updates, you really do not want to miss out on the latest news. 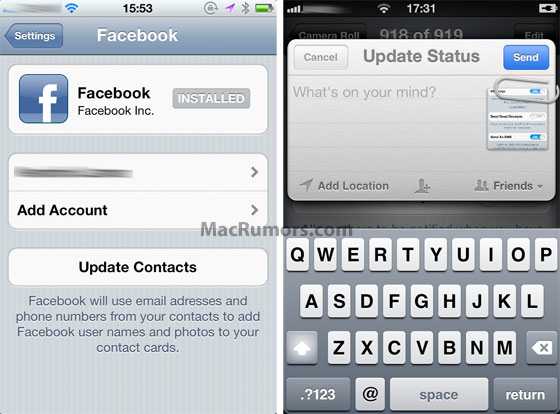