No the Symbian platform isn’t entirely dead just yet despite Nokia deciding to go with Windows Phone for future devices and the latest Symbian smartphone out of the Finnish camp is the Nokia 700 smartphone, and for the Symbian faithful out there we have a little hands-on video with the Nokia 700 for your viewing consideration below.

The Nokia 700 hands-on video comes our way courtesy of the guys over at Slash Gear that managed to get some hands-on playtime with the handset, who says that stock photos of the Nokia 700’s “slender scale” don’t really do the device justice.

Apparently according to Nokia the Nokia 700 is the smallest handset around by volume and the guys say it does feel compact in the hand, and apparently Nokia actually sent an employee to a jeans retailer to make sure the Nokia 700 fitted nicely in jeans pockets.

The guys do say that the real difference with the Nokia 700 from other Symbian devices is the inclusion of Symbian Belle, which is “surprisingly good,” with most of the visible changes being round the home screen with 6 widget sizes, and an Android type slide down notification bar.

So with all that said and not to spoil any Nokia fan’s enjoyment of the footage, I’ll leave it right there and let you head on down to mash that play button and check out the Nokia 700 hands-on, and decide whether this Symbian Belle handset is for your or not…enjoy.. 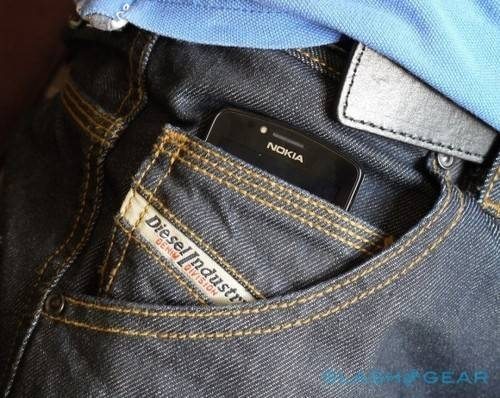