If you are one that is hoping to snap up one of Nokia’s new Windows Phone devices when they finally come out to play, we should hear more about those Windows Phones once Nokia World 2011 n London kicks off, but until then at least a couple of new images of the Nokia 800 have surface on the net to keep your interest.

These latest pictures of the Nokia 800 Windows Phone come our way courtesy of the guys over at Pocket Now and by way of The Next Web and shows that the Nokia 800 resembles the Nokia N9 with an added camera shutter button on the side, along with the flash now being relocated to the top of the camera rather than at its side.

The pictures are of the pink Nokia 800 model but there are also two other colours available, a black version, and a cyan model.

According to the Pocket Now guys, German carriers are excited over the Nokia 800 with a Deutsche Telekom rep saying the Nokia 800 has a “cool design and great build quality,” while O2 Germany is said to be “impressed” by the “design and simple interface” while Freenet, a Nokia distributor says, “Nokia starts with this device back where it left off before the crisis — at the top in quality, design and functionality.”

There is also rumour that Nokia will not be launching any of their Windows Phone devices in the USA until sometime in 2012, and you can read that particular article by hitting up (here). More on the Nokia 800 Windows Phone as and when we hear. 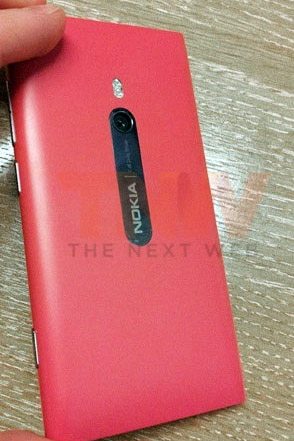