Other than patent lawsuit coming from Apple a new Apple patent does on occasion surface on the Internet and recently one such Apple patent popped up, a patent that details a new power management dock connector with a view to provide numerous devices with a power source via a single accessory.

The new Apple patent comes to our attention via the guys over at 9to5 Mac and by way of Patently Apple, with the idea of the new patent device powering such devices as smartphones such as the iPhone, media players like the iPod and monitors.

Basically the patent would enable Apple to power larger devices via the same accessory, meaning it could do such things as “SetMaxCurrent,” that would allow a large device to charge at a max available current level whilst delivering a proper current to operate the device.

The patent includes a “GetPrefPower” command that would determine what power line should be used, and “SetBatteryCharging” which would start and stop charging a battery.

The Apple patent also makes mention of a secondary 30-pin dock connector for the Apple iPad (image below) that would of course facilitate landscape docking of the iOS slate.

It does get all technical and as you may know I’m not the one for going into great technical details when it comes to such things as I have no wish to bore the casual reader, so if you are into all that technical jargon you can check out the full patent description over at Patently Apple.

Have to say though it does look like Apple is finding time to come up with these new patents rather than dedicating their time to filing patent infringement lawsuits against rivals, which has seems to be the main thing with patents these days. 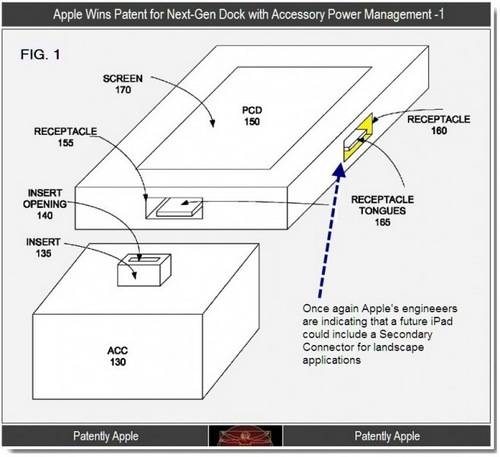