If you own a Nokia N9 smartphone you may or may not be aware that the PR1.2 update has now been released to the Nokia N9 although some owners may still be waiting on PR1.1 that was released not too long ago, but PR1.2 is now available and screenshot have now hit the net waves.

According to the guys over at My Nokia Blog and by way of Phonesfera, the changes in the Nokia N9 PR1.2 update are as follows…

The interface now separates the camera flash options, in the video recording interface separated the icon to turn the LED flash, the buttons now have a new style, in the handling of apps have added a button to manage apps, on the display there is now a new option for setting Colour Profile.

Also the Nokia N9 PR1.2 update offers the settings Gallery now features a new option for face recognition and the menu to display an image now has a new option to “Insert face.”

And that’s basically your lot with the PR1.2 update for the Nokia N9, we have posted a couple of screens below, but if you wish to check out all the screenshot of PR1.2 you can do so by heading over to Phonesfera.com.

Of course if any of our readers out there own the Nokia N9 and grab the PR1.2 update and happen to find anything else new we’d love you to share those findings with us by dropping us a line to our comments area below. 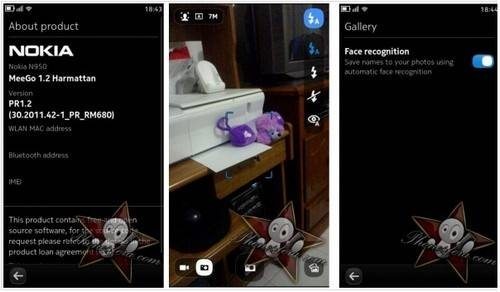