However the Carrier IQ Detector app for Android will not remove the software due to it being deeply integrated with the handset firmware and thus a user would need special device privileges to get it removed.

The Carrier IQ Detector app will keep the user informed as to just what their handset is doing but is not meant as a replacement for Lookout Mobile Security and will not detect or repair malware.

So basically if you own an Android smartphone and want to find out whether your handset has Carrier IQ installed albeit not really being able to do anything about it whatsoever, you can download the Carrier IQ Detector app for free from the Android Market. 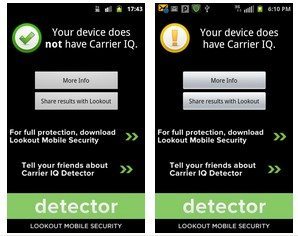