Of course in the mobile space it isn’t just smartphones that receive concept designs although there are quite a few about, but now that the tablet has entered the mobile arena these too have become part of the concept design game, and we have one for your consideration today, a Nokia N9 inspired Windows 8 tablet.

According to the guys over at Concept-phones, the Nokia N9 and Sony Tablet S inspired Nokia Tab Windows 8 tablet has been designed by Cameron McKinnon, and takes things larger that the Apple iPad 2 with a massive 14.3-inch display.

The Nokia Tab slate runs Windows 8 of course and as such will feature Microsoft Kinect motion capture via its front facing camera along with a 12 megapixel rear facing camera with Carl Zeiss lens and Xenon flash.

Design wise the Nokia Tab has ergonomic curves that enable holding the device comfortably whether in portrait or landscape orientation and all crammed into a device that is just 12mm thick, and has a curved screen to make Windows 8 gestures seem more natural.

Of course the Nokia Tab Windows 8 tablet is simply a concept so will like most concept devices never make it to the real world, but no doubt Nokia will enter the tablet space sooner or later and probably with a Windows 8 slate as their chosen smartphone platform is now Windows Phone.

So if the Nokia Tab Windows 8 tablet did eventually make it onto the streets would it be a tablet you’d give serious consideration to? 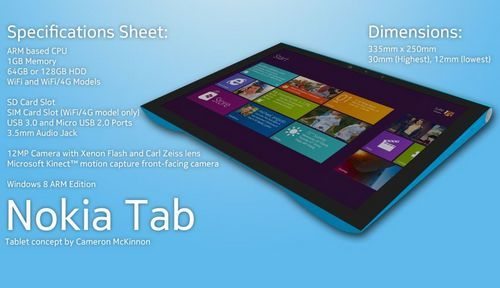