It appears that Gigabyte, usually known for such things as laptops, motherboards, graphics cards and such is stepping into the tablet arena, and especially the Android tablet market with a new slate that at the moment is only know as the GN-TB100, but the specs for this Android tablet have now surfaced.

According to the guys over at RootzWiki, the GN-TB100 is Gigabyte’s first offering to the tablet space and is a 10-inch slate running the latest Android operating system, Android Ice Cream Sandwich.

So here what specifications the GN-TB100 sports, a 10-inch multi-touch 1280 x 800 display, a 5 megapixel rear facing camera along with a 2 megapixel front facing camera, 3G connectivity, either 16GB or 32GB of onboard storage, 1GB of RAM, integrated microphone, Bluetooth 3.0, and WiFi b/g/n.

Apparently at the moment this Android tablet has a dual core Cortex A9 processor, but according to the representative that could change to a Tegra 2 processor at some point.

The guys say the device has a solid feel, along with a good grip, and apparently there’s a card slot on the side that is for a 3G radio rather than building one in, so all the user needs to do is get a card and insert it for internet usage.

Apparently the demonstration device the guys played with was running Android 3.2 Honeycomb, but the Gigabyte rep did confirm that when this tablet gets released it will be running Android 4.0, but no word on just when that might be or what price the ISC slate will command. 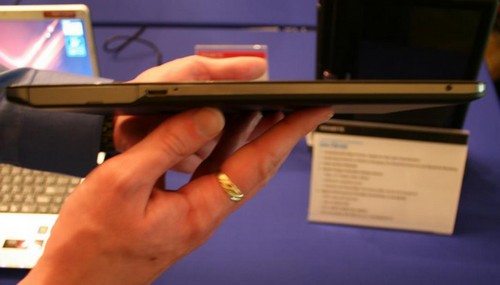 One thought on “Android GN-TB100 tablet from Gigabyte, the specs”