If you are the proud owner of an iOS slate you might like to know that the OnLive Desktop app for the iPad has now been released to the App Store, and iOS app that delivers full access to such things as full featured versions of Microsoft Excel, Powerpoint and Word.

According to the guys over at MacRumors, the applications are running on OnLive servers and streamed to your iOS tablet, and OnLive offered several plans for their service, which are OnLive Desktop Standard for free, OnLive Desktop Pro that starts off at $9.99 a month (coming soon), OnLive Enterprise, and OnLive Collaborative Services again (coming soon.)

With the Onlive Desktop app for the Apple iPad users can access, create and edit docs using Word, Excel and Powerpoint, transfer files between OnLive Desktop and other devices, and interact with lag-free video and animation.

For those that aren’t sure what OnLive Desktop is all about we have a little demonstration video for your viewing pleasure below, so don’t forget to head on down and mash that play button.

For those that wish to grab the OnLive Desktop iOS app for their iPad they can do so by hitting up iTunes where the app can be downloaded for free. 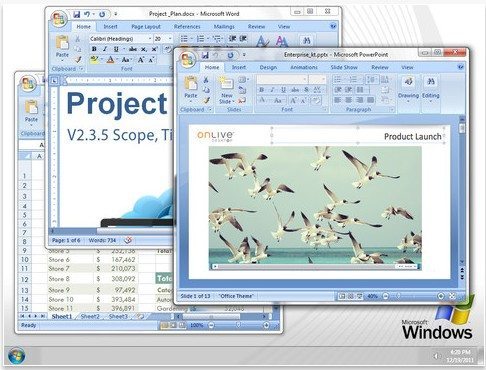