Discoveries within the iOS 5.1 beta 3 includes iPad 3 and Facebook, everyone knows that the new Apple tablet is possibly going to be announced in February with a March release, obviously this is all hear say at the moment. We have always said wait until official announcements before speculating, but we have to share this one.

Now is the time for questioning iOS 5.1 Apple Facebook Integration mystery, we visited iMore and they are reporting that the new iOS 5.1 beta 3 will have Facebook within the contacts of Apple devices.

Last year there were many rumours surrounding Facebook and Twitter integration, and only Twitter came true, if you look at the image below you will notice a new Facebook field within the contacts app.

With this in question, does it mean Apple Facebook integration will be released in iOS 5 or iOS 6, or not at all and we are all jumping to conclusions? Facebook have already said no to Apple once before, and that is why Apple chose Twitter.

There are so many questions we can fire out of our cannons, such as, do you think Apple and Facebook have had a genuine big fat hug and put forward the shaking of hands? It now looks like we are back in 2012 with the iOS Facebook mystery release. 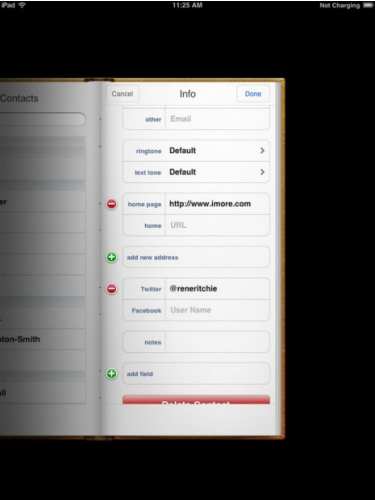