Siri vs Evi: Alternative for iOS and Android

As you no doubt know with the iPhone 4S best feature is the Siri voice assistant, and since Siri surfaced with the release of the iPhone 4S there have been a few attempts to port the feature to other iOS devices along with several Siri like clones for Android and even Windows Phone. However there is now a new app called Evi that is available for non-Siri iOS devices and Android devices that could possibly be a real contender.

And we have an introduction video of Evi for iOS and Android for your viewing pleasure below courtesy of the guys over at 9to5 Mac and looks to work rather well.

So basically Evi is a Siri alternative that is capable of voice or text input, and the user can chat to Evi in plain English, fine local info in the United Kingdom and the USA on dining, shopping and such, and Evi knows where you are and delivers answered based on your location.

The makers of Evi for iOS and Android, True Knowledge says the Evi app has almost a billion ‘facts’ and the ability to infer trillions if necessary.

So basically Evi is a new voice assistant for those that do not have Siri, could this new app be the real competitor?

Anyway that’s it, all you need do now is head on down and mash that play button to check out Evi then hit up iTunes or the Android Market to get your app…enjoy. 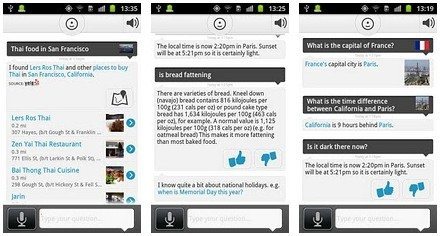 3 thoughts on “Siri vs Evi: Alternative for iOS and Android”