Galaxy Nexus gets discounted at Costco in Feb

If you are over the pond in the USA and are still sitting on the fence pondering on whether to snap up the first Android Ice Cream Sandwich toting smartphone, the Samsung Galaxy Nexus it seems that February just might be a good month to finally pick up the Android handset to play along with ICS.

The reason February is a good month is because the guys over at Droid-life are reporting that Costco will be running a Galaxy Nexus promotion during the month of February whereby you can snap up the smartphone at a discounted price.

The Costco promo runs from the 2nd of February through February the 26th and will knock a cool 50-bucks off the price of the world’s first Android 4.0 smartphone.

The guys say that although that $50 discount may not make the Galaxy Nexus as cheap as some online retailer such as Amazon, as Costco has a 90-day phones returns policy their phone deals should always be given due consideration.

Having said that, as Mobile World Congress 2012 is just round the corner and considering the Android space changes every few months, we could easily be seeing some quad core goodness arriving in the mobile space within that 90-days, so if something better catches you eye you could always return you Galaxy Nexus within that 90-day period. 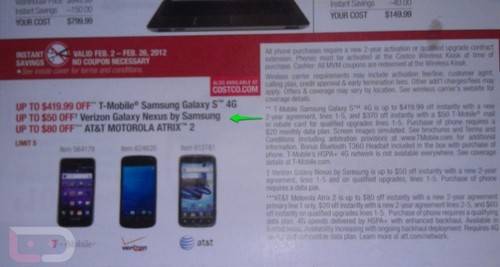