If you are a fan of classic platform games such as that speedy blue hedgehog Sonic, and own an Android device you can download Sonic 4 Episode 1 from the Android Market, which has now been updated to include Android devices that run the new Android Ice Cream Sandwich operating system such as the Samsung Galaxy Nexus.

However apparently there have been some problems reported with running Sonic 4 Episode 1 on Android 4.0 devices; however the guys are aware of these ICS issues and are currently working on a fix that they will push out as soon as possible.

So with that out of the way, the Sonic 4 Episode 1 for Android features enhanced gameplay and includes the classic Sonic Spin Dash and Homing Attack moves and has 2 special levels for smartphones that utilise an accelerometer.

The app included four unique zones along with four acts in each zone and there are seven special stages for you to check out to collect the seven Chaos Emeralds and unlock Super Sonic.

Sonic’s archenemy Dr Eggman returns in Sonic 4 Episode 1 with new and improved mechas, and when the boss accumulates damage he goes berserk.

Apparently this sequel has taken some 16 years to bring to Sonic fans but it is finally here and available to download to your chosen Android device at a cost of Â£2.56 by hitting up the Android Market. 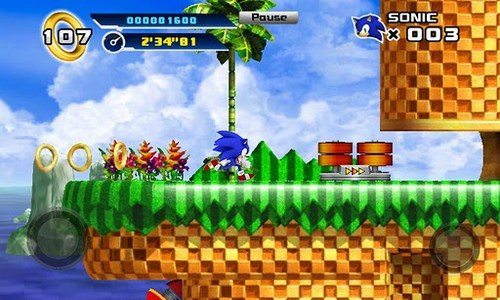 One thought on “Sonic 4 Episode 1 for ICS Android, about time”