Well now for those that don’t really like splashing out a huge amount of cash on a tablet, there’s a new 7-inch Android 3.2 Honeycomb slate heading for Sprint called the ZTE Optik tablet that can be in your hands this February for a very reasonable price although online only as the ZTE Optik tablet wont become available in Sprint stores until March.

And we have the specs breakdown of the Sprint ZTE Optik Android slate for your consideration courtesy of the guys over at Android Police, with the Sprint 7-inch slate making its debut online as of the 5th of next month, and in stroes as if the 11th of March.

So here are those all-important specifications, obviously there’s a 7-inch touch screen but at the moment the resolution is unknown, 1GB of RAM along with 16GB of internal storage, a 5 megapixel rear facing camera along with a 2 megapixel front facing camera.

The Sprint ZTE Optik also has a 1.2GHz dual core processor of some description but just what isn’t known yet, Bluetooth, 3G and WiFi connectivity, Android 3.2 Honeycomb of course, and a 4000mAh battery.

Now, as for the price of the Sprint ZTE Optik tablet, the slate will set you back a fairly reasonable 99-bucks when signing your life away for the usual two-year agreement, but if you don’t wish to commit for two years you can pick up the ZTE Optik tablet from Sprint off contract for $349.

So does the Sprint ZTE Optik tablet seem like an Android slate for you or do you have your eye on another Android slate? 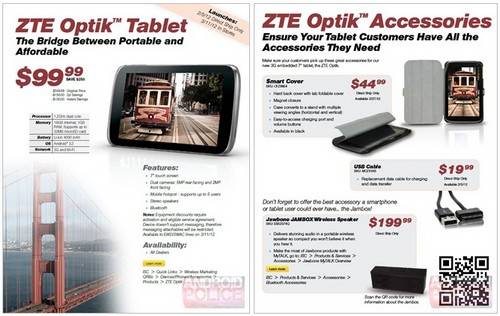 One thought on “The breakdown on Sprint ZTE Optik tablet”