Nokia Lumia 800 is an Irish winner

Although the word was the first Nokia Windows Phone wasn’t fairing too well in Europe it appears there is at least one country that the Nokia Lumia 800 is doing rather well, Ireland. Vodafone Ireland started offering the Nokia Lumia 800 on the 1st of this month and after only a few days Vodafone is now out of stock of the device.

According to the guys over at Phone Arena by way of WMPoweruser, it wasn’t known what inventory count Vodafone Ireland had, but as the carrier holds exclusivity over the Lumia 800 in Ireland you can no longer currently purchase the device.

Because of not knowing Vodafone’s inventory count it is difficult to determine whether there is a huge demand for the Windows Phone, but this isn’t the first time the Nokia Lumia 800 has sold out only a few days after becoming available as the same thing happened in the United Kingdom back in November.

We’d love to know if any of our readers over in Ireland have purchased the Nokia Lumia 800 smartphone and if so are they very happy with the device? 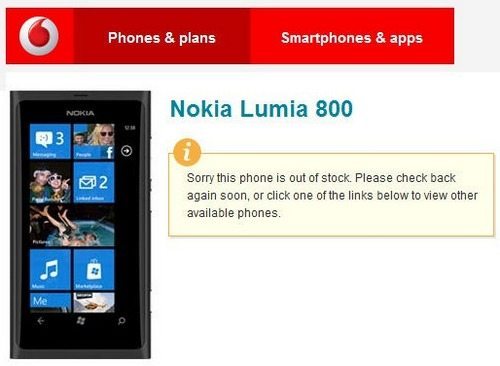