Samsung Galaxy Pop Plus S5570i listed out of stock

The guys over at GSMArena noticed to Samsung Galaxy Pop Plus S5570i up for sale over at Indian online store Flipkart who are offering the Android smartphone to the populace of India for Rs. 8330 albeit the handset being listed as currently out of stock.

Apparently that Plus tag means an increase in CPU speed, which has been clocked at 832MHz, which is quite a bump up from the Samsung Galaxy Mini 600MHz processor.

As mentioned above Indian customer can nab the Samsung Galaxy Pop Plus S5570i for RS. 8330, which is roughly a reasonable $170, and you can enter your email details to be notified when the device is again available. 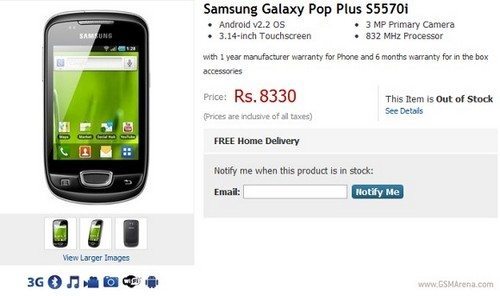