If you would like to turn your Android tablet into an extra monitor for Windows PC or Mac you can now do so by downloading the Air Display app for Android, and application that enables the user to use their Android screen to extend their desktop computer.

With the Air Play app for Android the user can make Photoshop and Illustrator usable on their laptop by placing the tool palettes on the Android display, fill the Air Display screen with utility apps like Calculator, Mail, iChat and iCal, move your iWork and office palettes along with inspector windows into Air Display, and use the extra display for auxiliary development tools.

Apparently Air Display for Android doesn’t only work as a wireless computer screen extender but also as a tablet input device where you can use your finger to draw directly onto the screen, and when you disconnect, reconnect or rotate the screen the windows are auto-repositioned so the user doesn’t have to drag them back onto the Android screen.

Air Display employs a unique dynamic compression algorithm and thus performance is said to be extremely responsive, and works in both portrait and landscape modes, whilst on a typical WiFi network mouse cursor refreshes are indistinguishable from a wired mouse.

For those Android users that would like to try out Air Display for Android you can download the app from the Android Market at a cost of Â£6.37, approximately $10. 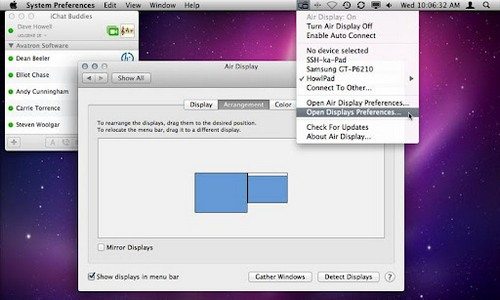