For those iPhone and Apple iPad tweeting fans out there Twitter has now updated their app for iOS devices and adds new features whilst bringing the app back to its former glory, and brings the version up to v4.1and delivers two new important features, the ability to copy and paste for tweets and profiles and the return of swipe shortcuts.

Previously both swipe shortcuts and copy and paste for tweets and profiles were removed in a recent update, something that annoyed many users, causing some to opt for 3rd-party alternatives lick Tweetbot, but now those features have returned, so perhaps those that did jump shit will return also.

Other changes in the Twitter app for the iPhone include verified badges in people search results, the addition of Turkish, font size settings, confirmation alert for Find Friends, profile now shows whether a user is following you and numerous other bug fixes and polishes.

Whether the return of the missing features along with all the new improvements can tempt those that dumped the Twitter iOS app back remains to be seen, but if you wish to now make use of the updated Twitter 4.1 app you can of course download it to your device as a free download by hitting up iTunes. 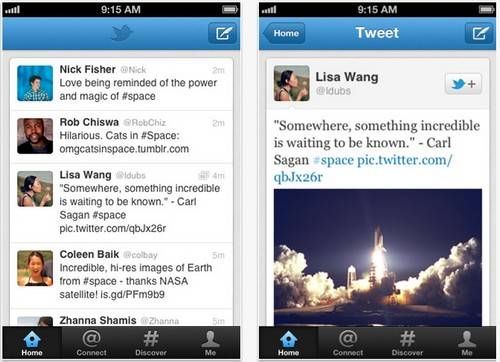