All the action for the 84th Academy Awards takes place tomorrow night, Sunday February 26 and millions of people around the world will be watching the ceremony unfold on TV. These days there are some really useful apps around for big events and we have some great apps to recommend for the iPhone and iPad for the Oscars 2012.

All of the following are free apps and first off there’s the official Oscar app. The Academy Awards website tells how this is available for the iPhone and iPad and will feature over a dozen live stream videos for the Red Carpet, backstage at the awards and also the Governor’s Ball. You’ll also get the lowdown on insider information and Oscar buzz and there’s an interactive ballot. You can download this Oscars app here but be aware that you won’t see live streaming of the actual ceremony on the app.

Another suggestion brought to our attention by NDTV is the Hollywood Reporter: The Race to the Oscars iOS app. Download here and you’ll be able to access all the latest news, film trailers and check out the nominees, reviews and bios. You can also follow Twitter Oscar feeds and even test your knowledge with Oscars trivia. On the night itself you’ll be able to find out the winners, their reactions and take a look at the best and worst dressed on the Red Carpet.

We already found another couple of Oscars apps courtesy of the Chicago Tribune such as the Live From the Red Carpet app. You’ll be able to see Ryan Seacrest and Guiliana Rancic interviewing the stars and check out the fashions. There’s also a ‘Live Event’ feature in which you’ll be able to read tweets from the hosts and celebrities. Download this one here.

Our final selection is for those who may want to have a little Oscars fun with friends and it’s the Awards Hero: Oscars Edition app (download here). This is nicely interactive as once you’ve looked through the nominees you can then vote on your predictions to win. The iPhone version then allows you to create an Oscars Pool to compete with friends. As well as this, there are screen trailers and movie info and new for 2012 are movie posters and photos that show the history behind the Oscars.

Hopefully this selection of free apps will really add to your enjoyment of the Oscars 2012 and while we’re waiting for the big occasion why not let us know if you have any more good Oscars apps to share. You could also give us your Oscars winners tips. 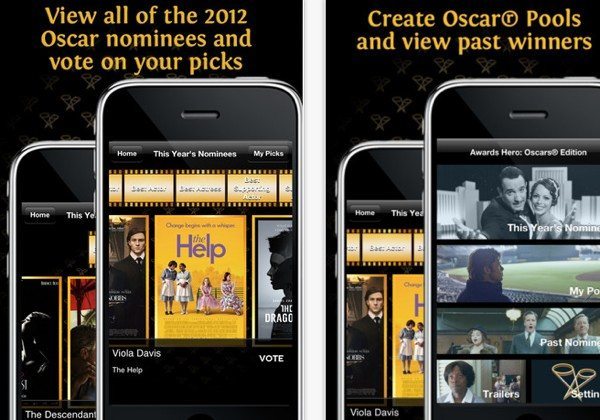 One thought on “Great Oscars 2012 Apps for iPhone & iPad”