Getting to grips with LG Optimus 4X HD

Recently a new Android smartphone came to our attention that we rather liked the look of, the LG Optimus 4X HD. It has some very decent high-end specs and is heading for a release in Europe in the second quarter of 2012 and may be released in other regions later. Now we can tell you more about getting to grips with the Optimus 4X HD with news of a hands-on experience.

As well as our look at specs for this upcoming smartphone we also gave readers a comparison of the 4X HD vs. the LG Vu and the Samsung Galaxy Note, all phones with large screens, although the 4X HD is the only one to go quad-core. After taking a more in-depth look at the 4X HD it seems that it could be a genuine contender for the top, from the various quad-core processor smartphones that are presently arriving to the market.

Luckily the team at Engadget managed to get their hands-on the 4X HD at Mobile World Congress in Barcelona and it’s good to hear that from their experience it seems that our first opinions of the 4X HD have been backed up. The handset was noticeably light and slim (8.9mm) and runs on the latest Android mobile OS, 4.0 Ice Cream Sandwich though it has been tweaked. There was praise for its 4.7-inch HD IPS display with resolution of 1280×720 and the NVIDIA Tegra 3 1.5GHz quad-core processor gave “lightning-quick” web browsing.

The LG Optimus 4X HD also packs an 8-megapixel rear camera and 1.3-megapixel front-facer but the lack of a camera button was seen to be a drawback. Cleverly, pinch to zoom functions usually used on stills can also be used for videos and there’s 1080p HD video recording capability. You can see a video of the hands-on look at the Optimus 4X HD below this story. As a reminder we’ll tell you that this smartphone also has 16GB of internal memory, 1GB of RAM, DLNA support and a 2150mAh battery. If you want to find out about more Android quad-core phones then check out this article for some of the best that are on the way.

Ultimately LG has set out to impress with the Optimus 4X HD, which could be up amongst the best of the quad-cores when it finally releases. We’d like to know your impressions of this LG smartphone. Are you ready for your first quad-core processor smartphone and will it be the Optimus 4X HD? 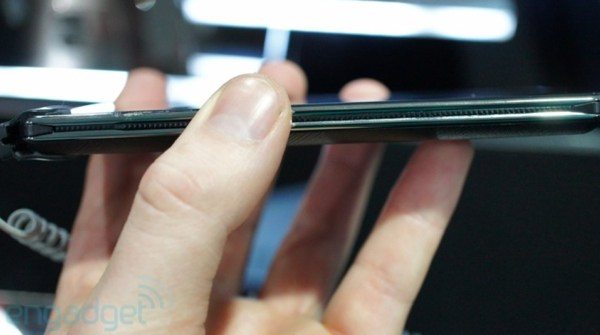