Whilst at Mobile World Congress 2012, Vimeo took the advantage of announcing a new improved app for the iOS platform with native support for both the iPhone and Apple iPad, with a new interface and tools to edit creative clips whilst on the move.

The updated Vimeo iOS app is now compatible with the iPhone 3GS and above, the Apple iPad, iPod Touch and iOS 4.3 and above and enables the user to view and manage their existing Vimeo videos along with downloading them to the camera roll.

The new Vimeo app for the iPhone and Apple iPad now integrates the Viemo Music Store, making it simpler to add a soundtrack to your video footage, along with a built in video editor to allow user to create and upload footage when on the go.

With the Vimeo app for iOS the user can view videos from their feed, watch later queue or previously liked videos, comment on and like videos easily, add videos to your watch later queue, easily upload your raw footage and edited videos in SD or HD.

The Vimeo app also enables the sharing of videos to social networks such as Facebook, Tumblr, Twitter along with sharing via SMS or email, access statistic on plays, comments and likes, along with the ability to add videos to albums, channels and groups and edit privacy settings, credits, tags, descriptions and titles.

For those iOS faithful out there that would like to check out the new and improved Vimeo app you can download it to your chosen iOS devices for free by hitting up iTunes. 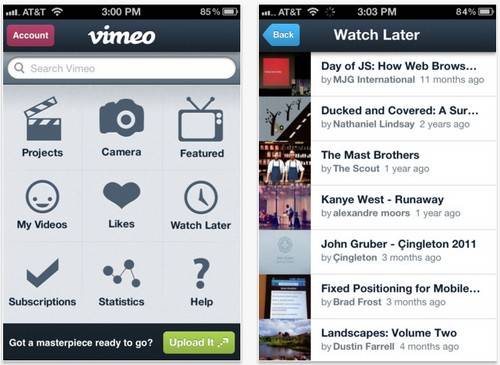