Yes, well okay, if you are into the zombie thing and ever wondered how some zombies move fast whilst other zombies are more or less in a state of vegetation and wish to find out the answer apparently scientists have figured out that all-important question and if you own an Android device you can find out to via the RadiantWalls HD Zombie Virus app.

The RadiantWalls HD Zombie Virus for Android enables the user to see the microscopic bacterial and viral of zombies that has been recorded by the scientists, but are in fact live wallpaper for your Android device.

Apparently the research includes Mortuuscocci Iterumvita (B23-12) where your basic zombie are infected with a strain that reanimates dead bodies and modifies cell structure, then there’s Milesmortussvirdae (M3-13) which is a synthetic virus antidote for the B23-12 infection that mutates as it feeds on undead bacteria and thus allowing the zombie to run at speed.

Lastly there is stage 3, Loquinervifectios (FC202) a fully infected synapses where a zombie will show 100% infected nerve cells that pulse in their infected state, and if you understood all that you are a better man that I am, although I have never been into the zombie thing anyway, but there’s a video below for your viewing pleasure.

Apparently the live wallpapers work well on most Android smartphones and tablets or other device that supports live wallpapers, and the “move to SD” feature has been disabled as they get removed whenever you unmount the card or reset the device.

So if you are into the zombie thing and would like a few zombie live wallpapers on your chosen Android there are two versions available the Zombie Virus Free or the paid version RadiantWalls HD Zombie Virus for Â£0.94 from the Android Market. 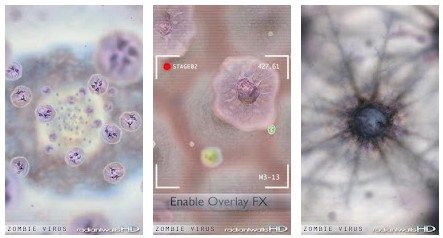