If you happen to be a fan of Twitter and also an Android fan you might like to know that there is now an Alpha release of Boid for Android available to download from the Android Market, and is a Twitter app that has been designed with Android ice Cream sandwich in mind, and constructed purely for Android 4.0 devices.

Obviously with Boid for Android being in Alpha there are still a few bugs and glitches to sort out, but it does look just how a systems app should look if it came with stock Android Ice Cream Sandwich, and supports multiple accounts along with great navigation ability throughout the application.

With the Boid for Android Twitter app the user can even pick between three differing app themes including an awesome new dark theme. New in the app are many interface improvements, more friendly error messages, whilst tap and holding on a tweet list now shows three options, quote, retweet and reply.

Also new in this Alpha release of Boid for Android is the app no longer has to be restarted for theme changes to take effect, and of course numerous important bug fixes.

And that really about it, although there is a promise to deliver a tweet reviewer, tweet composer, the ability to view friends and followers, a home screen widget, list and saved searches and full tablet support coming soon.

So there you go, if you wish to download and give this Alpha version of Boid for Android a whirl you can do so by hitting up the Android Market where the app is available for free. 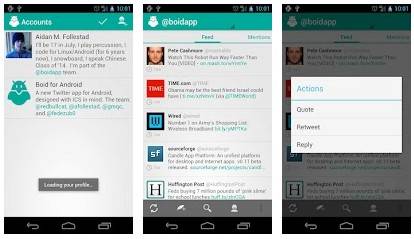