Looks as though new iPad is heading to Sprint

Since Apple’s new iPad was finally announced on Wednesday we’ve been bringing readers all the news on specs, release and more and we now have some news for Sprint customers. The new iPad is already confirmed as being carried by Verizon and AT&T and now it seems it could also be heading to Sprint…although not quite yet.

This is not yet confirmed but a leak does certainly suggest that Sprint will get its hands on the new iPad at some stage. Sprint has already announced the development of its LTE network and we previously told how a Sprint version of the Samsung Galaxy Nexus is already confirmed for its LTE network when ready. News of the new iPad also heading to the Now Network will certainly please a lot of customers and we certainly hope this leak is accurate.

The information comes from a Best Buy database where there is a list of items clearly marked for the Sprint new iPad, as reported by Engadget. While this certainly doesn’t mean the new iPad is about to go on sale with Sprint at the same time as the general release on March 16, it does tell us to expect it on Sprint in the future at least. Maybe it will be launched on Sprint at the same time as the carrier releases its Galaxy Nexus?

For those who have yet to learn the details of the new iPad, some of the main specs and features include a new Retina Display, LTE connectivity, improved camera with 1080p video capture, new A5X dual-core processor and quad-core graphics, so all in all there’s a lot to impress. The starting price is $499 and it comes in black or white and in 16, 32 or 64GB models, WiFi or WiFi + 4G.

Are you a Sprint customer hoping that the new iPad would be coming to your carrier? Are you willing to wait for Sprint to get hold of the new iPad or will you be purchasing on another carrier? 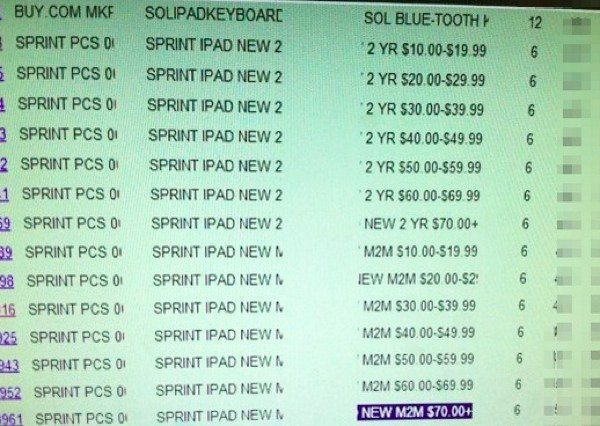