The new iPad from Apple is set to release tomorrow, March 16, and the first reviews are coming in. Hot off the press we’ve been taking a look at some of the initial thoughts from the experts about the new iPad (formerly dubbed the iPad 3) and we thought we’d give you a review roundup to give you an idea of what’s being said. You’ll see that the reviews give wild applause for Apple’s latest tablet.

Briefly to recap you with the key specs and features for the new iPad before we take a look at those reviews, it has an A5X dual-core processor with quad-core graphics, 9.7-inch Retina Display with resolution of 2048×1536, new iSight 5-megapixel rear camera with 1080p HD video capture, autofocus, image stabilization and backside illuminated sensor and it runs on the latest Apple mobile operating system, iOS 5.1. Also this time around the iPad has 4G LTE connectivity options.

The first review to come to our attention was by Joshua Topolsky over on The Verge. He wanted to discover whether the new iPad still retained the iPad crown as ‘King of Tablets,’ and as he gave it a rating of 9.3 it seems it does. He found the updgraded specs of the new iPad impressive, noting the “substantial upgrade in nearly every department.” So is the new Retina Display everything we hoped for. Apparently the answer is yes. Topolsky almost runs out of hyperbole to describe the beauteous display and yes, just from reading his description we want one.

Good points of the new iPad were noted as the display, LTE not having too much effect on the battery life, the camera, more RAM, improved processor and Apple’s software. The only negative points were that iOS lacks some features and the price, specifically if you pay for the LTE variant. In conclusion Topolsky felt that the new iPad “stands head and shoulders above the competition.” Be warned, if you read this review you will want one.

The next review we looked at came from the esteemed John Gruber at Daring Fireball who again tells of the “pure joy” of the display. He tested an AT&T 64GB model with 4G LTE and found its performance “remarkable” when using it in San Francisco. Gruber also had praise for the improved battery noting that after two hours of usage the battery life capacity had only dropped to just above 80%, which appeared around the same as the iPad 2 without using LTE. Gruber was also suitably impressed with the new iPad then saying simply, “What’s not to love?” However he did note that the LTE, Retina Display and the increased battery needed for those came at the price of the new iPad being slightly thicker and heavier. This was seen as a minor compromise though and it was noted that the new iPad was still a lot thinner and lighter than the original.

The next of our review roundup is by Vincent Nguyen of SlashGear who wanted to see if the new third-generation iPad lived up to expectations. Nguyen said that the user experience is “where the new iPad really shines” and has also placed a poll within his article asking whether readers will be buying the new iPad. At this moment in time with the poll still ongoing, 20.76% say they will buy the new iPad 4G/3G version and 31.2% say they are going to buy the WiFi-only new iPad. You can check out the full results at the Slash Gear link above. All-in-all Nguyen also has glowing praise for the new iPad saying that Apple has “perfected the tablet form.” In a nice touch he also says that “Steve Jobs would have approved of the new iPad” and to be frank for many, that’s good enough.

The final review of our roundup comes from M.G. Siegler over on TechCrunch and once again it’s glowing stuff. Indeed Siegler notes, “once you see and use the new iPad, there will be no going back.” There’s admiration for the Retina Display once more as well as the quality of photos taken, LTE speeds and the bonus of the new iPad Verizon LTE model having mobile hotspot functionality. Minor quibbles included the fact that the new iPad takes longer to charge and does get warm on the lower left corner. However Siegler notes the massive technological step forward for the new iPad. In wrapping up we’re told that, “There’s really nothing not to like beyond a few minor nitpicks,” and Siegler ends with the precise but pertinent, “If you don’t yet have an iPad, get the new iPad.”

We’ve also embedded a video review from The Verge below our story so you can get a really good look at the new iPad. After looking at some of the first reviews then we have to say that they are pretty unanimous in their enthusiasm for the new iPad. We’d like to hear from readers about this. Were you already determined to purchase the new iPad? Maybe you were in two minds but have now decided? Kindly let us know by sending your comments but I may be late in tomorrow morning… I have somewhere I need to go! 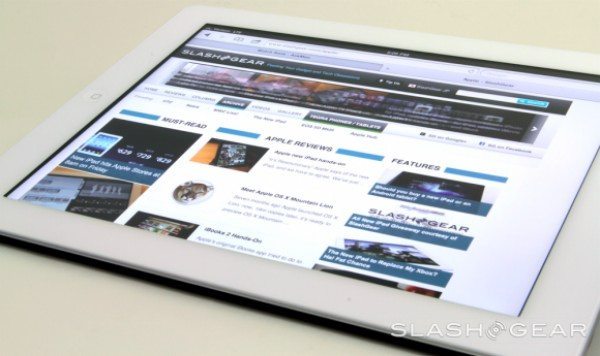