With the new Formula One season now underway we thought our readers might appreciate a look at some of the best 2012 F1 apps available. These are for Apple iOS devices and also Android and include both free and paid apps so read on for more.

TV coverage this year is on a dedicated Sky F1 channel as well as some races being covered by the BBC. If you can’t relax in front of the TV to watch though, or even if you can but want to enhance your Formula 1 experience with apps, there are some fantastic apps available for iPhone and iPad and also Android devices.

First off we’ll start with a real biggie but it is pricy so be warned. The F1 2012 Timing app is the official F1 app and is available for iOS here or for Android here both priced at Â£19.99. You don’t get live streaming with this app but you do get some remarkable features. One of them is 3D live track positioning to track the drives of each car and also live data and championship points’ status. Each race also benefits from a notifications system to keep you informed with events as they happen and there are also race packs showing things such as race highlights after it’s all over.

Another good app is F1 News HD and this is particularly good if you’re an enthusiast of one of the Formula One teams as it specializes in team-related news. Included are driver profiles that show Twitter profiles and Wiki pages if available. There are also constructor pages and the main page provides a rolling news feed. You can download the iOS app here priced Â£1.49.

If you want to know every little piece of nitty-gritty about Formula One then you might like the Maxis 2012 F1 app. This is for the serious enthusiast so if you just want more general coverage then one of the others may suit you better. The Maxis F1 app includes a Calendar with live race commentary and all the gen on details such a track conditions, lap times, and temperatures. Apart from this there’s the minutiae taken care of so if you want to know all the more technical aspects this will be the app for you. This is a free app and offers a lot for nothing, such as a results section, detailed track maps and more. Get the iOS iPad app here or the Android app here.

An article over on Pocket-Lint also lists some more great suggestions in detail such as the BBC iPlayer app, the Sky Sports for iPad app and also Sky Go (which requires a subscription), so check out the link for more on those. Qualifying for the first race of the season is now over and Lewis Hamilton for McLaren beat teammate Jenson Button to pole for the big race tomorrow in Australia. Get ready then to sit back, download some F1 apps and enjoy the 2012 Formula One season ahead.

Do you already have any of these apps and could recommend them? Maybe there’s another F1 app that you would like to share details of with our readers? 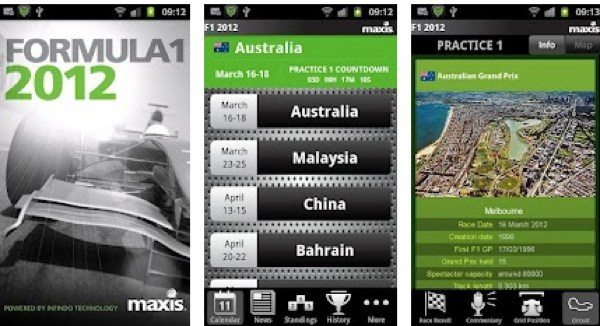