Talk about the Samsung Galaxy S3 (S III) is rife as we gear up for a possible unveiling soon. Just lately there have a few leaked photos purporting to be the real Galaxy S3 but we’ve been less than satisfied as to their validity. Now though another new Galaxy S3 image has come to light that seems a whole lot more convincing.

Just a couple of days ago we told readers about a leaked press image of the Galaxy S3 and although we couldn’t be sure whether it was genuine or not, something didn’t seem quite right. The new photo though really does look as though it could be the real deal. It shows an ultraslim rather nice-looking smartphone with a Samsung Galaxy III backdrop and all we can say is that if this one is not the genuine article then the image has at least been very well put together.

The image was originally posted on Reddit and the same picture shows the name of Weber Shadwick, which is a real global PR company. Although nobody can say for sure right now as Samsung uses different PR firms across the world, it’s certainly possible that Weber Shadwick could have been hired to promote the Galaxy S3. The image was brought to our attention by Droid Life who also point out that the handset on the poster (?) shows a date of May 22 with the words, “Watch a Live Broadcast of the GALAXY S III Unpacked Event.” Many had thought that an event scheduled for later this month was to reveal the Galaxy S3 but in recent days that has been in doubt so a May 22 event could be plausible.

Other things gleaned from this latest image are that the handset shown has silver edging and has an almost edge-to-edge screen, which is something that many people would like to see. There are no on-screen keys along the bottom though so in this respect it differs from the Galaxy Nexus. Instead it features a single home button. Also spotted are a lock switch and camera button to the right as well as a volume rocker to the left side. A camera to the front is visible along with a slight camera protrusion on the reverse of the phone.

As to the question of its legitimacy Droid-Life feels it is semi-legit and we have to say that it certainly looks as though this leaked image could be genuine. Over on The Verge this leaked image is also discussed and they describe it as “one of the more well done mock-ups” but feel there are some irregularities that cast doubt on it being the real Galaxy S3. However the site also explains that other details undoubtedly look as though they could be authentic such as the OS appearing to be Android 4.0 ICS with Samsung’s TouchWiz.

We’ll be following developments and hope it won’t be too much longer before we find out if this is the real deal. However for now we’re sitting on the fence with this one but want to know if you think this could be the actual Galaxy S3? If you think it is, are you pleased with what you see? 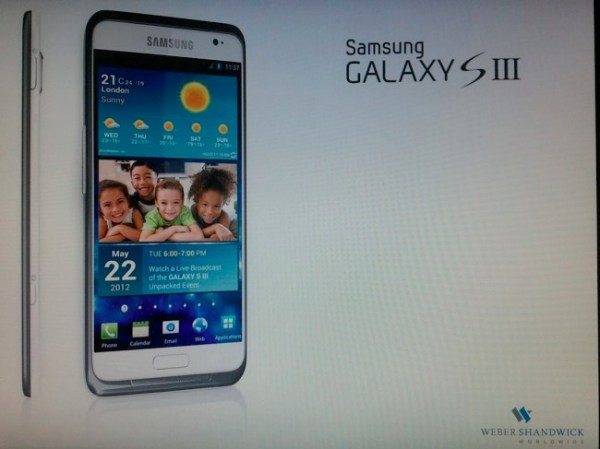