Better Cracked Screen has been developed by m3roving and requires Android 1.6 or later. Version 2.1.8 is a free app and has been downloaded millions of times in the last 30 days so is obviously a big hit. Basically it does exactly what it says in the title so you can play pranks on your friends by letting them think they’ve broken the screen of your phone. You can see a video below this story of how it works and it has a user rating review of 4.2 stars so pretty good.

If your friends have been fooled by this gag before and think it’s a trick they may simply press a few buttons and think all will be well. With Better Cracked Screen though if you press the Back button or Home button it still appears to be broken. The way to actually close the app is simply to shake your phone but that’s something your friends are unlikely to think of. There are various ways to trigger the prank, realistic sound effects, different breakage effects and even a custom delay. It’s pretty convincing stuff and if you want to try it out head to the Google Play link here.

Better Cracked Screen Pro is also available and this is a paid for app costing Â£0.64 ($0.99) and has new cracks. This is version 2.1.6 requiring Android 1.6 and later and has an average user review rating of 4.5. You can download it from Google Play here. If you choose to download either of these apps or already have then we’d like you to let us know what you think of them so send us your comments. 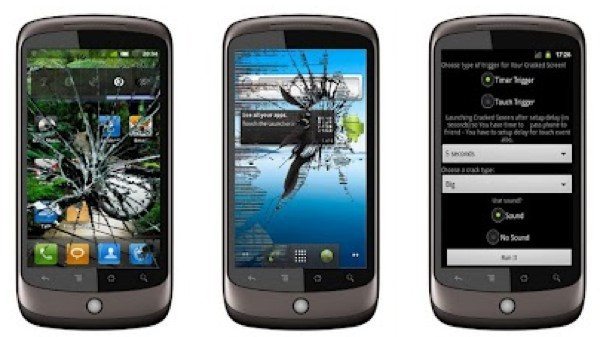