Looking for the best app optimized for new iPad

Since the new iPad from Apple was launched on Friday there have already been phenomenal sales as most of us expected. One of the key reasons for its instant success may well have been the new Retina Display with a fantastic resolution of 2048×1536. Today we are looking at some of the best apps that have been optimized for use with the new iPad.

When the new iPad was announced many were impressed by the specs and features including that new Retina Display and it was evident in our review roundup that many of the experts were blown away by the new display. Not only was the resolution stepped up to give 264 ppi but Apple also found a way to increase color saturation. The new display along with the quad-core graphics of the new iPad combine to give a vastly enhanced gaming experience and we noted how we were looking forward to the first swathe of new iPad-optimized apps.

A few days ago Apple put together a list of apps that would best take advantage of the Retina Display of the new iPad. Developers have been working feverishly and no doubt would have been pretty excited about the possibilities opened up to them by the higher resolution display. Indeed Apple also increased the size of its limits for OTA downloads so that developers could make the most of the potential. Apple suggests 24 apps for the new iPad that can make full use of the Retina Display, covering all sorts of interests.

The full list can be seen on Apple Insider but includes games such as Labyrinth 2 HD, Sky Gamblers: Air Supremacy, Real Racing 2 HD and also educational apps such as Star Walk for iPad, Solar Walk and Barefoot World Atlas. All can be purchased through iTunes or if you have a previous version can be downloaded directly from the App Store app on the iPad. Obviously these have to be pretty good for the new iPad as they have been directly recommended by Apple but you may also feel another app should be added to these recommendations, in which case let us know.

You may also be interested in a video that you can view below this story showing some of the top optimized apps for the new iPad. Have you tried any of these new iPad-optimized apps yet and if so which do you think is the best you’ve tried so far? 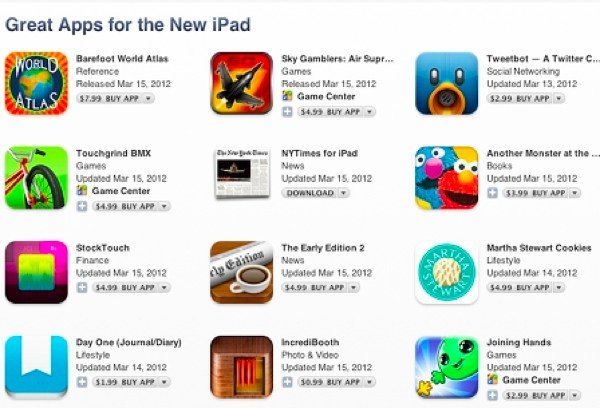