If you have an incoming call or text message and your smartphone is out of earshot, or not on your person then obviously you’ll miss that call or text. However what if you had a patch or tattoo that vibrated when your phone received a message or call? Well apparently that’s the new tech Nokia is looking into for the future.

According to an article over on the BBC, by way of Unwired View, the “vibrating tattoo” idea has been described in a recent patent filing by Nokia with the USPTO, and is described as spraying, stamping or tattooing “ferromagnetic” material onto a persons skin that will pair with the users mobile device.

The patent was filed last week and names Cambridge based Zoran Radivojevic as the lead inventor, and the patent suggest that the patch/tattoo could be placed on the users fingernail, finger, abdomen or arm, and that differing vibrations could be used to deliver a range of alerts.

Apparently a magnetic field could cause vibration of a short pulse, weak pulses, multiple short pulses, long pulses and the like, and could apparently also be used as a form of identity check, so basically the “tattoo” could be their own magnetic fingerprint.

So basically when your smartphone receives a call or message and is paired with the tattoo, your phone will send out a specific magnetic field, which the material detects and then starts vibrating in a particular pattern to let you know.

However, whether Nokia will move forward with this is another question, as when contacted, a Nokia spokesperson wouldn’t confirm whether Nokia intends to follow up with this latest patent tech. So what do our readers think about this idea of having a tattoo that vibrates to alert you when your device gets a call or message? 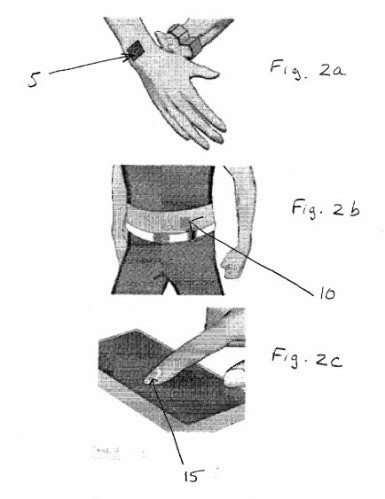