Most know that BlackBerry maker Research In Motion is falling behind their rivals and having quite a hard time keeping up with the likes of iOS and Android that continue to eat into RIM’s market share. However, Research In Motion hopes to pull back some of their former glory when they finally release their new BlackBerry 10 smartphones.

The problem with RIM is that their BlackBerry smartphone designs have become somewhat bland, but with a little creativity perhaps RIM could turn things around, such as the concept design for the BlackBerry Blade, which comes our way courtesy of the guys over at Ubergizmo and by way of Crackberry.

The BlackBerry Blade concept would feature an aluminum and acrylic housing along with Gorilla Glass and a slight curved form factor with a slide up touch screen to reveal that familiar BlackBerry keyboard. 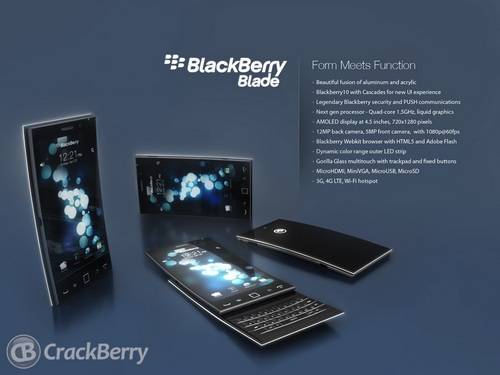