Back in the day, many of you will remember Tamagotchi’s that took the world by storm. However a new craze from Japan may soon be another big hit, the iPhone Smart-pet robotic dog. It comes from the same creators as Tamagotchi toy manufacturer Bandai and soon many people could be using their iPhone’s as a dog’s face.

The new development, dubbed Smartpet, is a robotic dog that interacts through the use of an iPhone. A free application that will be available in the App Store soon will connect the dog to the iPhone and users will be able to see up to 100 different facial expressions for their dogs and get it to perform tricks. You can view a video of the Smartpet in action below our story.

News of the Smartpet comes to us from Razorianfly and apparently the Smartpet is so clever that the more the pet gets used to its surroundings the more it will become emotionally attached. It seems this is made possible as the pet can analyze movements (either voice or gestures) that its owner makes through the iPhone’s FaceTime front camera. That seems pretty amazing but we’d love to try out the experience.

The Verge reports that the Smartpet will also be able to join in with other dogs singing and dancing via Bluetooth while it can also be used as a handsfree phone or an alarm clock. It comes in black or white varieties and Japan will see the release of Smartpet on April 24 priced at around Â¥6,500 ($78). The free app to control your robotic dog becomes available in the App Store on March 31

Bandai is obviously expecting big things from Smartpet and is forecasting sales of 200,000 units in its first year. There’s no word yet on a release for other regions but obviously if the Smartpet takes off it’s very likely to come to other countries. Would you like to try out Smartpet? Do you hope it comes to other regions soon? 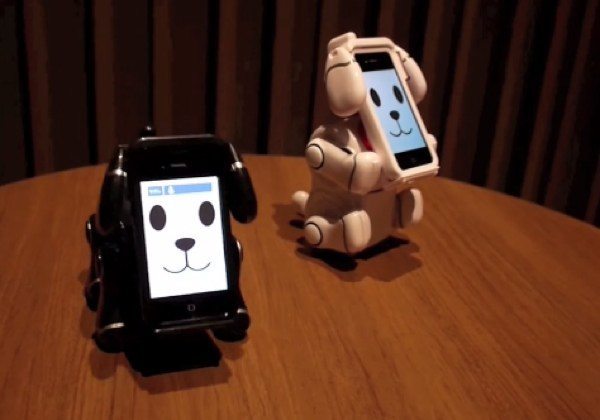