Last month at Mobile World Congress 2012 in Barcelona, Opera debuted Opera Mini 7 for Android, and now the Opera Mini 7 for Android has been given an update to include Opera’s WebGL hardware acceleration that improves on the applications compresses browsing feature called Turbo along with expanding the Speed Dial landing page further than 9 websites.

According to the guys over at Cnet, Opera’s product manager for mobile, Phillip Gronvold told them that Opera Mini’s data compressing Turbo makes for an important option for users on tight data restriction plans, and says that Turbo works differently on differing Opera versions, and Turbo can sacrifice website stability in favour of bandwidth saving in some cases up to 90% less data.

However the update does not include the new home screen that should arrive with Opera Mini 7 for feature phones that will deliver interactive social networking for those that own lower powered devices.

The Opera Mini Web Browser for Android is a fast and efficient browser that enables the user to surf the web on their Android device as easily as on a desktop, whilst reducing data cost by up to 90 percent by using the compression tech. For those Android faithful out there that haven’t already grabbed the Opera Mini Browser app, you can grab the app as a free download from Google Play. 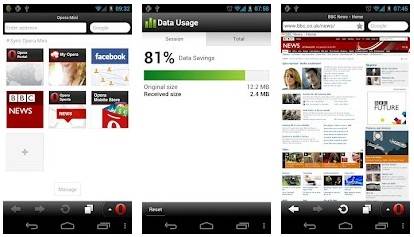