Today we have news for you of the next MyTouch slider smartphone for T-Mobile, the Huawei Ascend G312. It’s a new departure for a MyTouch handset to come from Huawei and it looks as though there will be two variants of this phone, one of which will have a QWERTY keyboard.

The phone was seen at Huawei’s HQ in Shenzhen and tagged the Ascend G312 QWERTY (or “Buddy”) which certainly implies a non-QWERTY version too. Whether the name detailed in Shenzhen means that it will turn up called the MyTouch Buddy is not yet known but it’s possible. Engadget were lucky enough to be in Shenzhen and managed to grab a brief hands-on experience with the Ascend G312 QWERTY and first impressions seem to be that it’s a decent enough handset.

Specs and features include a Qualcomm MSM8255T 1.4GHz processor, 4-inch WVGA display, 5-megapixel rear camera capable of 720p video capture and a 0.3-megapixel front-facing shooter. The new MyTouch for T-Mobile also has 1GB of RAM, 4GB of internal storage (expandable with microSD), DLNA connectivity and five-second fast boot. The operating system is not yet clear as the specifications listed Android 4.0 Ice Cream Sandwich while the one that Engadget managed to get their hands on was only running Android 2.3.6 but we’d imagine the former is more likely than the latter by the time it releases.

Engadget found the build quality of the Ascend G312 QWERTY to be satisfactory and particularly liked the keyboard feedback and also the spring-loaded sliding mechanism. However the display was noted as not being that great especially considering viewing angle and contrast. Pricing is expected to be competitive although has not been announced yet. For a closer look at the hands-on experience check out the video below this story.

When we learn more about this MyTouch phone we’ll let readers know. We’d like to hear your thoughts on the next T-Mobile MyTouch slider. Does it looks like something that you would consider purchasing? Maybe you will only consider it if it’s launched running Android 4.0 ICS? 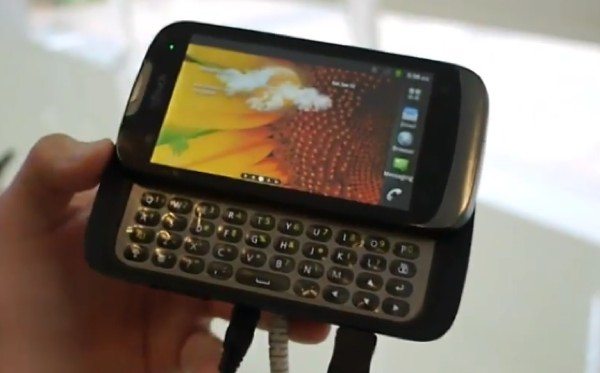