If you are over the pond in the good old US of A, and waiting patiently for the arrival of the new HTC One X smartphone on the AT&T network, you just might not have such a long wait to be able to snap up the Android handset as you first thought, because the latest rumour is the HTC One X could possibly launch earlier than that original mid-May date.

According to the guys over at Ubergizmo by way of Android Central, those waiting for the HTC One X to hit AT&T could possibly be able to snap up the device as of the 6th of May rather than waiting until the middle of the month.

Of course there currently is no official release date for the HTC One X been announced by AT&T, so it could possibly be just an estimated release date by Best Buy, the email does give an SKU for the AT&T One X, but according to the guys if you hit up the Best Buy website the SKU doesn’t turn up any results.

So there you have it, a bit thin I know, but it does seem that there is now a possibility that the HTC One X will release on the 6th of May, are you waiting to snap up this Android Ice Cream Sandwich handset from AT&T? 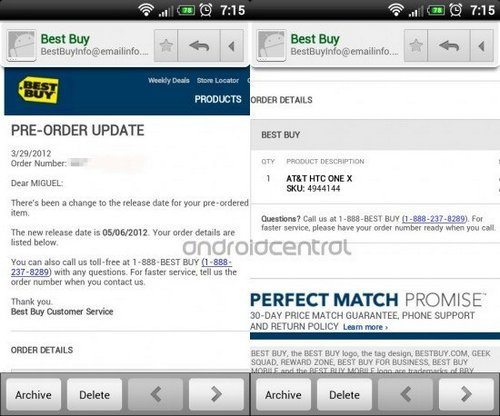