Galaxy S3 may be revealed next month ahead of release

There are many smartphone fans looking forward to the release of the Samsung Galaxy S III after the first two versions have proved to be really successful, and arguably it has been one of the most sought after handsets on the Android platform. Today we have news that the upcoming device may finally get its big reveal next month following a possible press invite leak.

We have seen a number of leaks recently about the device including many fake renderings as well, but as you can see in the image thanks to Phandroid this latest one could actually be the real deal. As you can see in the image it states the device will be unveiled in London on May 22nd, and while the invite doesn’t really reveal much with regards to the new handset most press invites don’t.

Normally though press invites don’t go out this much in advance but this hasn’t been officially released yet, and looking at the handset in the image it does seem a lot different from the Galaxy S2. The various Galaxy Nexus leaks did show off an exaggerated curved design so the same situation could be happening with this leak.

Adding more fuel to the speculation about the press invite is a tweet by Eldar Murtazin who says he has no comments about the image, and he has previously claimed to have actually held the device. Previously Samsung said they decided not to showcase the Galaxy S III at MWC 2012 as they felt the device warranted its own showcase, and they wanted to do it nearer to the time the handset would be available to consumers.

Until this date is officially confirmed by Samsung we won’t know if it is another fake, but the last version of the handset was first released in May so there could be some truth in the date. Recently we have seen many rumours about the device with the screen and other features speculated about.

Do you think this invite is real? 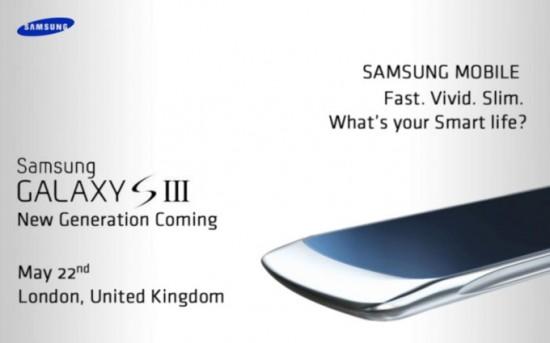