Desirable US HTC One X for A&T image outed

It’s no exaggeration to say that the HTC One X quad-core processor smartphone is one of the most anticipated handsets of the year so far. This top-end handset has wowed many who’ve managed a hands-on experience and it has just released in the UK and Europe leading many people to their nearest stores. It’s headed to the US soon for AT&T and now we have news of an image with the AT&T branding clearly displayed.

Judging by its reception so far where released, we reckon there will be many eager AT&T customers waiting to get to grips with the HTC One X despite the fact that the US variant will not have the Tegra 3 quad-core processor that it has for Europe but instead will be powered by a Qualcomm Snapdragon S4 1.5GHz dual-core processor. The AT&T variant will have 4G LTE connectivity though and news of the image should reassure many that the US HTC One X is on its way.

The photo of the AT&T HTC One X was brought to our attention by Wireless Goodness and shows the white version. We’re also informed that the HTC One X for AT&T seems to perform speedily despite not having a quad-core processor so it will certainly be interesting to see benchmark results when they become available. There’s still no firm US release date for the HTC One X although May looks like the month and we heard a recent rumor that it could be May 6 so fingers crossed.

Other specs and features of the HTC One X for AT&T include a 4.7-inch HD touchscreen display, 8-megapixel rear shooter with 1080p video capture, a 1.3-megapixel front-facer and all running on the latest Android OS, 4.0 Ice Cream Sandwich. The HTC One X is a handsome-looking device, has a lot to offer for the discerning consumer and is one of the few smartphones that could really compete against the upcoming Samsung Galaxy S3 and the Apple iPhone 5.

As well as this HTC One X image, a picture of the HTC One S for T-Mobile can also be seen at TMO News, another in the HTC One series heading stateside and rumored for a release in April. We’d like to know if you’re intending to purchase the HTC One X on AT&T and if so what has been the key selling point to you? Why not let us know by sending in your comments. 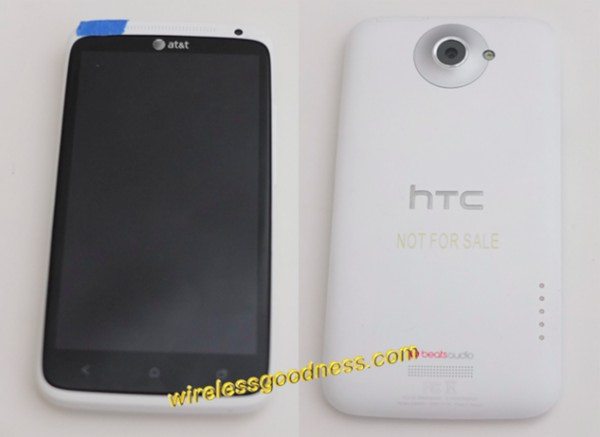