It appears that Apple might be gearing up for a makeover to their earbuds that could see future earphone being untraonically welded unibody earphone, if a recenly surface patent application is anything to go by, although just because Apple has applied for the patent doesn’t mean it will happen in the near future.

According to the guys over at Cnet the Apple patent was published by the US Patent and Trademark Office, and apparently involves melding together multiple pieces of plastic, so obviously Apple isn’t contemplating dropping their white for aluminium.

The welding of those multiple bits of plastic is done via ultrasonic rather than a liquid or adhesive, although Apple does suggest that the ultrasonic method would produce a more seamless and aesthetically pleasing set of earphones.

Apple has for some time now made efforts to make their gear using unibody building techniques, with an end result that the structure can be lighter, stronger and thinner than some traditional multi-peice designs, and a design that has already been rumoured to be used on the upcoming iPhone 5.

Obviously earphones require holes to enable the sound to travel, and creating those holes can leave remnants in or around the holes, which degrade both sound and look of the accessory, and as such the patent application presents a tool for deburing a ‘a curved plastic object,’ as mentioned by the guys over at Apple Insider.

Thus it appears that Apple is looking to delivering future unidoby sytle earphone accessories for their iPhone, iOS tablets and other gear, but of course as usual with Apple we won’t know anything for sure until Apple is good and ready. 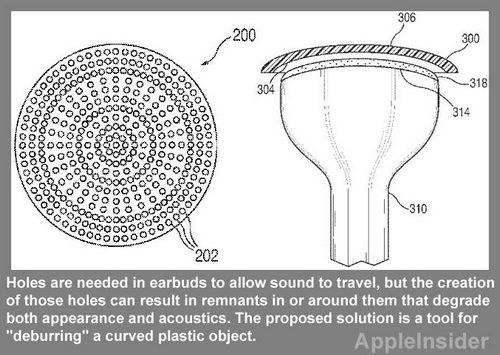