Texts from dog so funny it hurts

Well at least someone out there has an inventive humorous imagination along with a bulldog that apparently sends his owner text messages, and the guy is funny tweeter @OctoberJones, who’s posts showing the texts from his bulldog have gone viral due to being so hilarious.

The guys over at the Huffington Post brought our attention to the Text from Dog over on Tumblr, where you can view and will brighten up your day if you are feeling a little bit down.

Of course I highly doubt that the bulldog is actually sitting there punching out those funny text messages to his master himself, but it does make for amusing reading and you can of course always imaging the dog actually holding a smartphone and sending of those messages.

Have to say when the bulldog takes a jibe at Madonna, it made me laugh somewhat, imagining Madonna as a bulldog…hilarious, and did you know that dogs love cats, and hedgehogs are drug crazed addicts? And the dog brings a whole new meaning to laying the table.

Furthermore this particular talented bulldog seems to imagine himself as a caped crusader, BATDOG, although apparently he uses curtains for his cape.

Anyway there are quite a few very funny conversations between dog and master, although I must warn you that both aren’t against using profanity at times, so if you aren’t offended by the odd swear word, head on over to textfromdog.tumblr and check them out…enjoy. 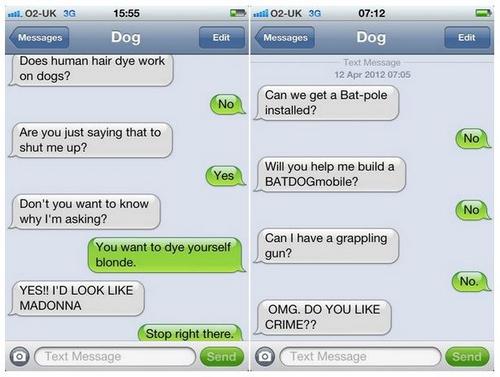 One thought on “Texts from dog so funny it hurts”