The Galaxy S3: What everyone is looking at

We’ve published countless posts now about the Galaxy S3 (or S III) and the nearer we get to a possible release the more the hype seems to be building. Near to a major product launch there are always some image leaks and we have already seen some for the Galaxy S3. Another new photo has emerged today and we’ll show you what everyone is looking at, but is this image genuine?

We like to share leaked images with our readers although of course until an official launch we have no way of knowing if they are indeed the real deal. Today’s new image looks very much at first as though it could be the much-awaited S3 but looking closer it seems that there are also signs suggesting it’s fake. Some of the indications though do seem to imply this Galaxy S3 could be genuine such as the flatter rectangular home button on the front.

Recently we told that this was highly possible after a compromise was said to have been reached within the design team with rumors suggesting the type of home button depicted in this image would be placed in a smaller area than the Galaxy S2 below the screen, just as on the photo which we are showing below. Before we go further we’ll tell you that the image was sourced from a Polish blog, oPDA and brought to our attention by Softpedia and it’s claimed that the image was sent to the blog by somebody currently testing the device.

Apart from the home button that was recently leaked it’s also noted that this image of a purported Galaxy S3 shows a five-row column pattern that was also recently leaked as coming to the S3, similar to that of the Galaxy Note. Android 4.0 Ice Cream Sandwich is also anticipated for the Galaxy S3 and is confirmed in this photo. However it seems there is a fair amount of doubt that this is the Galaxy S3. Tech Radar points out that the screen doesn’t appear to align with the handset and of course this would be a big no-go. Also the design looks rather ‘classic’ like the original Galaxy S but with the home button simply elongated. There’s also the curious question as to why the apps in the image have been pixelated.

Yet further doubts are pointed out by BGR who say it’s unlikely that the Samsung logo would be so close to the top of the display as can clearly be seen and also point out the alignment of the display, easier to see when looking at the thin blue line above the app icons. It’s certainly interesting then but as we previously said nobody can currently verify if this is the genuine Galaxy S3, apart from Samsung itself of course. At least you now know what everybody’s been hunched over their desks looking at though!

We’d like to hear from you and ask for your views on this alleged Galaxy S3 image. Do you think it’s convincing enough to persuade you that it’s the real deal? Maybe you think there are just too many pointers that suggest otherwise to be assured of its authenticity? 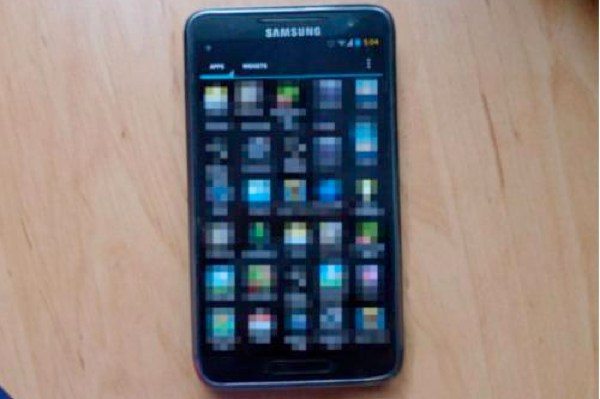 6 thoughts on “The Galaxy S3: What everyone is looking at”