Back in February we brought you news on the Asus Transformer Pad 300, an Android tablet aimed at the lower-end of its tablet market. We said that pricing would have to be competitive if Asus was to find success with the Tranformer Pad 300 on release and we now have details of the release date and also price.

The Transformer Pad 300 features an NVIDIA Tegra 3 1.2GHz quad-core processor, 10-inch IPS touchscreen with resolution of 1280×800, 8- megapixel and 1.2-megapixel cameras, 1GB of RAM, LTE connectivity (some models) and will run on Android 4.0 Ice Cream Sandwich so you can see that although this is at the lower end of the Asus tablet range it’s still a very decent tablet. Users should get around 10 hours of battery life or up to 15 hours using an additional battery (in optional keyboard dock).

The tablet also has a micro-HDMI port as well as a microSD card reader. Asus has now revealed the US release date as April 22 and it’s very much being focused on as a laptop replacement. Although Asus itself has said that pricing for the Transformer Pad 300 will not be given until the release date, PC World tells how pre-orders are now available through retailer BJs with the 32GB and 1GB of RAM model at $399. The Verge also managed to obtain a quote for a 16GB model at $379.

We’ve embedded a video of a hands-on review of the Tranformer Pad 300 below this story so you can see it more closely. This tablet is available in three color options, red white and blue. What are your thoughts on the Asus Transformer Pad 300 and if this pricing is accurate do you think it is competitive enough? Are you tempted to purchase the Transformer Pad 300? 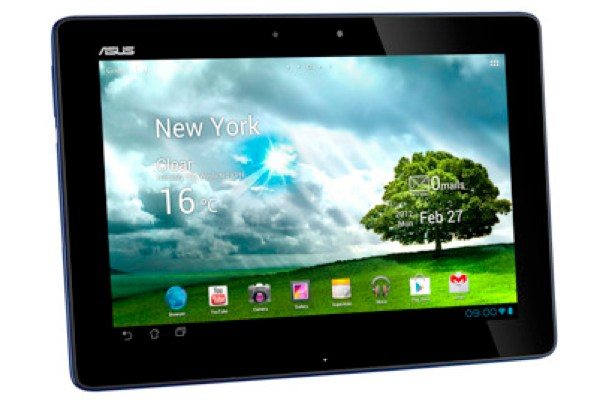