If you are an owner of an iOS device and like watching television there is a mobile app available called Viggle that enables the user to check in to their favourite television shows and receive rewards from such retailers as Burger King, Old Navy, Best Buy, Fandango and more, and of course the Viggle app is currently only available for the iOS platform, but is expected to hit the Android platform soon.

The Viggle app for the iPhone, iPod Touch and Apple iPad enables users to check in to their favourite television shows, earn points for every TV show you they tune into and redeem those points for real rewards.

With the iOS app users can redeem their Viggle points for such rewards as music, gift cards, and movie tickets, and the more TV shows you watch the more points you receive.

You can share your check-ins and let your Facebook and Twitter buddies know what TV shows you have been watching, and you can also play games, watch videos, take quizzes and polls to rack up even more Viggle points.

For those iOS faithful out there that are interested in Viggle for iOS and gaining rewards, you can download the Viggle app to your chosen iOS device as a free download from iTunes.

Naturally as with most mobile apps, the Android faithful have to wait until they can take advantage of Viggle on their device, much like they had to wait an age for Temple Run and other apps to make it to Android, so for now, which can be somewhat of an annoyance, Android has to wait yet again. Isn’t it about time developers delivered an Android version of an app at the same time as iOS, or perhaps even before iOS? 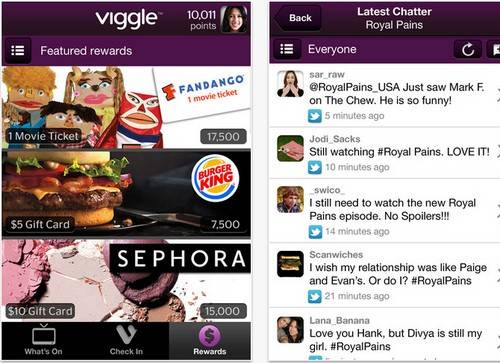 One thought on “Viggle app for iPhone, Android waiting game”