Smartphone cameras have come a long way in recent years but some still prefer to use a dedicated digital camera to capture those special moments. There are a number of applications that have been released for people using digital cameras to make life easier, and today we have news of an iPhone Flash Dock for DSLR photography.

When trying to use a smartphone app at the same time as a DSLR can be rather tricky, but a new clever little device may finally be the solution to the problem. The Flash Dock is a new hot shoe smartphone dock, which according to Digital Trends will allow users to easily access smartphone apps while using a DSLR camera.

The accessory has been developed by France-based Pocket Demo, and founder Bruno Rousseau said the idea behind the gadget was to solve the issue of using a DSLR while making use of the number of helpful apps available. He added that “Flash Dock solves that issue by bringing the touchscreen of the smartphone right next to the DSLR setting screen and buttons….and the possibilities are endless.”

Pocket Demo’s website says that having a smartphone attached to the top of your DSLR makes it easier to get the most of your wireless Eye-Fi SD card, which will allow users to quickly share images via email or cloud services.

Many cameras still don’t have GPS functionality but users can have the possibility of easy geotagging by transmitting GPS data from a smartphone to the camera via Bluetooth, or to be merged later with a photos metadata via the appropriate software. The company also suggests users make use of a level application for when taking shots that require a perfectly straight frame.

A light metering application could also be used or even a depth of field calculator, and while you could easily just hold the phone in your hand the Flash Dock does make things a lot easier. The device is priced at $40 so whether keen photographers think its worth the money remains to be seen.

What do you think of the Flash Dock? 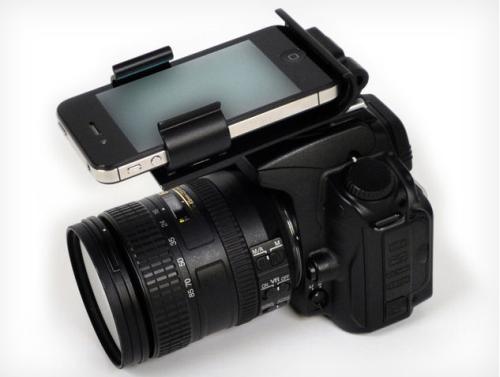