We continue to give you news and speculation about the iPhone 5, or new iPhone, as we know how many people are interested in the next iteration of this iconic handset. Of the many rumors and speculation we’ve heard, one idea that is getting a lot of attention right now is an increase in screen size to 4-inches but a concept of what this might look like makes us wonder if it would be a flop.

When the prospect of a larger display for the iPhone 5 was first brought into the arena many of us were excited about a larger-screened iPhone. The trend with many of the latest smartphones is for larger and larger screens and the 3.5-inch screen of the current iPhone 4S looks pretty small by comparison. When taking time to consider this more carefully though we like the current overall size of the iPhone as it sits comfortably in the hand and makes it easy to navigate with one hand if necessary.

Many of us had imagined that a larger screen might be managed with an edge-to-edge display and the loss of bezels but the problem with this is that current apps have not been designed with this in mind and this would cause a major headache for developers who would need to update all of the apps to fit the new display. We soon saw some concepts where the overall size of the iPhone had simply been lengthened meaning a longer and thinner device but many weren’t keen on that idea. Now a new mock up shows how the display could be increased while still keeping the current overall size.

The mock up was brought to our attention by TiP and was created by Will Hains at Good Will Blogging. Although Hains shows that a 4-inch Retina Display could still be possible while keeping the iPhone dimensions the same we’re unconvinced that many would like how this has been achieved. The home button has been shrunken to almost nothing with chunky side bezels to create a longer display that can show 5 icons high rather than 4. Take a look at the image below to see what we mean. We think this looks plain weird and if in fact this turned out to be how Apple deals with this dilemma we’d be pretty surprised.

This report also takes a look at this latest mock up of the iPhone 5 and notes the similarity between it and the Nokia Lumia 710. Although in theory this concept would allow the larger display that many of us would like to see while retaining the sharpness, we’re not sure that iPhone customers would like this compromise. It’s a hard choice though. We’d like a larger display but somewhere along the line that means changes, but how to make those changes while endeavoring to keep most people happy will be somewhat of a challenge for Apple. It will certainly be interesting to see what Apple finally comes up with.

Let us have your thoughts on this by sending your comments. Do you feel you’d rather keep the current display size for the iPhone 5 rather than the changes you’ve seen so far? Maybe you disagree with our doubts about this latest mock up and would like to see something like this for the iPhone 5? 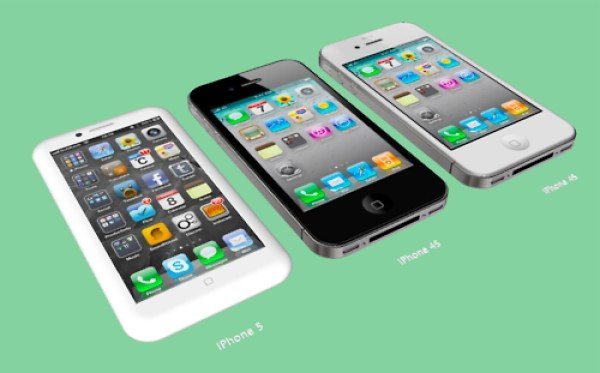