The team on Phones Review are dedicated in bringing you all the news on the latest mobile phones and tablet PCs, but the way technology is changing we sometimes have news on other products that can interact with our mobile devices, one such item is the new Nikon D3200 that can be controlled by your smartphone and apps.

We have already reported on a number of smartphone applications and accessories that can interact with your DSLR camera, and today we have news of the Nikon D3200 that is due to release later this month. SlashGear are reporting that the company has revealed their latest DSLR that features a 24.2 megapixel sensor, and is aimed at consumers buying their first DSLR camera with its good low light performance coupled with Full HD video capture.

The new unit offers a DX-format CMOS EXPEED 3 image processor that can return 4fps of continuous shooting along with 1080p HD. Nikon’s D3200 offers support for the company’s new WU-1a Wireless Mobile Adapter, which enables owners to use a smartphone or tablet as a remote control that offers image previews and a remote shutter release.

This requires the downloading of an application and the purchase of the Wi-Fi adapter that lets you walk away from the D3200 but still see what is seen through the viewfinder on your mobile device. Currently the application is only available for the Android platform but an iOS version is expected later this year in the fall.

The D3200 has an ISO range of 100 to 6400 as well as an ISO 12,800 for those really low light shots, and there is also an eleven point autofocus. Those that are new to the technology can make use of the in-built Guide Mode that provides information on getting the most out of the DSLR, which includes adjusting settings to best suit the situation.

Video capture is taken with full focus and a choice of automatic or manual exposure control, and connectivity includes an HDMI output for watching content back on an HD TV. There is also a stereo microphone input while the display on the back is a three inch 921k dot LCD panel.

The Nikon D3200 will be released later this month in the US priced at $699.95 with a choice of black or red colour schemes and an 18-55mm lens, while UK consumers can expect to see the D3200 next month in black with the kit costing about Â£650 or the body only for Â£560, and the red version will follow later in the year. The wireless WU-1a adapter costs around Â£55/$60. 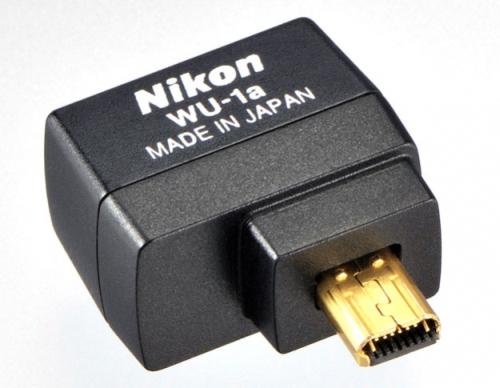