We’ve been writing a lot about the HTC One X as this flagship smartphone for HTC has impressed a lot of people. Famed for its Tegra 3 quad-core processor (Snapdragon S4 dual-core for the US), one of the main concerns about this phone was whether the battery life would live up to expectations. News today tells how HTC One X battery tests have proved fruitful, which probably means even more people will rush to get their hands on it.

The HTC One X is packed with decent specs but the downfall of many otherwise excellent smartphones lately has been their battery performances. As we are increasing data use with our phones and are now seeing cutting-edge specs such as quad-core processors, high-resolution displays, improved cameras and the latest software many of us have found that our phones cannot get through an average day’s use without the battery draining.

Motorola recently addressed this issue by taking one of its successful handsets, the Motorola Droid Razr, and bumping it up with a larger battery to become the Motorola Droid Razr Maxx. So how has HTC done battery-wise with the HTC One X? It seems the manufacturer has actually done very well indeed. Engadget tells how HTC is applauding itself following testing on the HTC One X. The company has issued a blog post pointing out that people who have tested it have had praise for the battery life. Its own tests took place on the international version with quad-core processor rather than the dual-core AT&T variant for the US and seemed to show glowing results.

HTC explains that the HTC One X shows a 147% performance increase in talk time over one of its previous handsets, the HTC Sensation. It also shows a 39% increase in video playback time compared to the Sensation, a 105% improvement in MP3 playtime and a 23% increase in Web browsing time. Anandtech (who carried out independent third-party testing) was apparently impressed with the battery life of both of the HTC One X variants but Engadget tells how although they were satisfied with the dual-core HTC One X (even with LTE enabled), they were less satisfied with the global version.

It does appear though that HTC has been taking consumer concerns over smartphone battery performance seriously and the company points out that its engineering teams have spent thousands of working hours on the Battery Stamina Boost Project for the HTC One series of phones. It seems as though there’s yet another aspect worth recommending about the HTC One X then and so far we’ve heard very few complaints about this device, which is still to see a US release.

What are your thoughts on the HTC One X and its battery performance? Do you already have the international version and if so, how have you found the battery life? Maybe you’re waiting for the US variant and news of these battery tests has made up your mind that this is the right phone for you? Let us know with your comments. 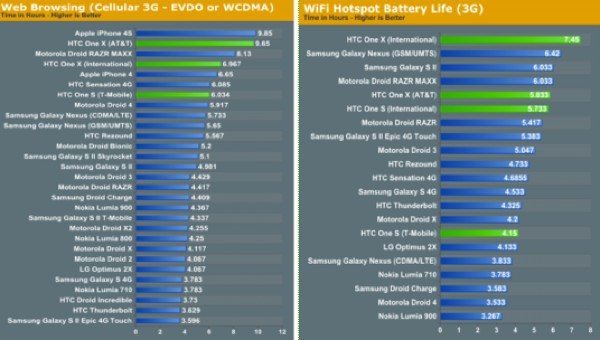