The Samsung Mobile Unpacked Event 2012 is taking place as we speak and the reveal of the Galaxy S3 (S III) is already underway. However we already have news for you of a hands-on preview and video in advance of the official announcement so read on for more.

It’s no exaggeration to say that the Galaxy S3 is one of the hottest phones of the year and has been highly anticipated and we’ve been waiting to pass on all the news to our readers. The handset has finally arrived and it looks to be a beauty but let’s hope it offers at least most, if not all of the things we were hoping for.

Engadget was lucky enough to get its hands on the Galaxy S3 just before the event started and first impressions from the hands-on look are positive. First off we can tell you that the Exynos 1.4GHz quad-core processor that most of us were expecting is indeed evident in the finished article and there’s also a 4.8-inch HD Super AMOLED screen.

Design-wise we think it looks pretty good although Engadget sound a little disappointed that it doesn’t veer much from other Galaxy designs. At only 8.6mm thick it will be available in Pebble Blue or Marble White, so our previous story about the color options turned out to be correct. All of the questions about whether it would have a physical home button or not are also answered and yes, it does still have a physical button although it’s smaller and less noticeable.

The display earned some praise with good resolution and excellent viewing angles and there’s good news for those who had been hoping for wireless charging as that is in development. Samsung has focused very much on the software for the Galaxy S3 and it runs on Android 4.4 ICS overlaid with Samsung’s Touchwiz interface. Samsung is also heavily promoting the use of S Voice voice interaction although it was not working in the brief hands-on time with the phone.

Overall first impressions were promising with a high-definition screen and the quad-core processor that many expected. However Samsung do seem to have concentrated more on the software rather than outstanding hardware. We think that plenty of potential Galaxy S3 customers will like the styling of the new phone though despite the fact that it’s not exactly cutting-edge and many will probably feel that Samsung could have wowed us all just a little bit more.

All-in-all it looks as though Samsung will certainly have another hit on its hands with the Galaxy S3. Earlier today we spoke of how Apple will be following the event and although first impressions are that the Galaxy S3 is a very impressive phone, we don’t think Apple will be quaking in its boots just yet. However, these are very initial first thoughts and we’ll wait to see more in-depth looks of the device before passing final judgement.

You can also see a video look at the Samsung Galaxy S3 below this story. We’ll have more coming up very shortly about the full specs for the Galaxy S3 so do check back with us for more on this new flagship device. Let us have your first thoughts on the Galaxy S3 design and what we know about the specs and features so far. Are you impressed? Maybe you’ve already decided to purchase this new smartphone? 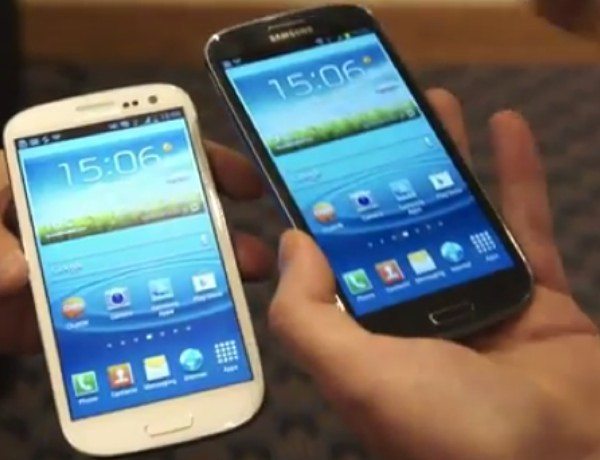